Why Are Diets and Biodiversity Linked? 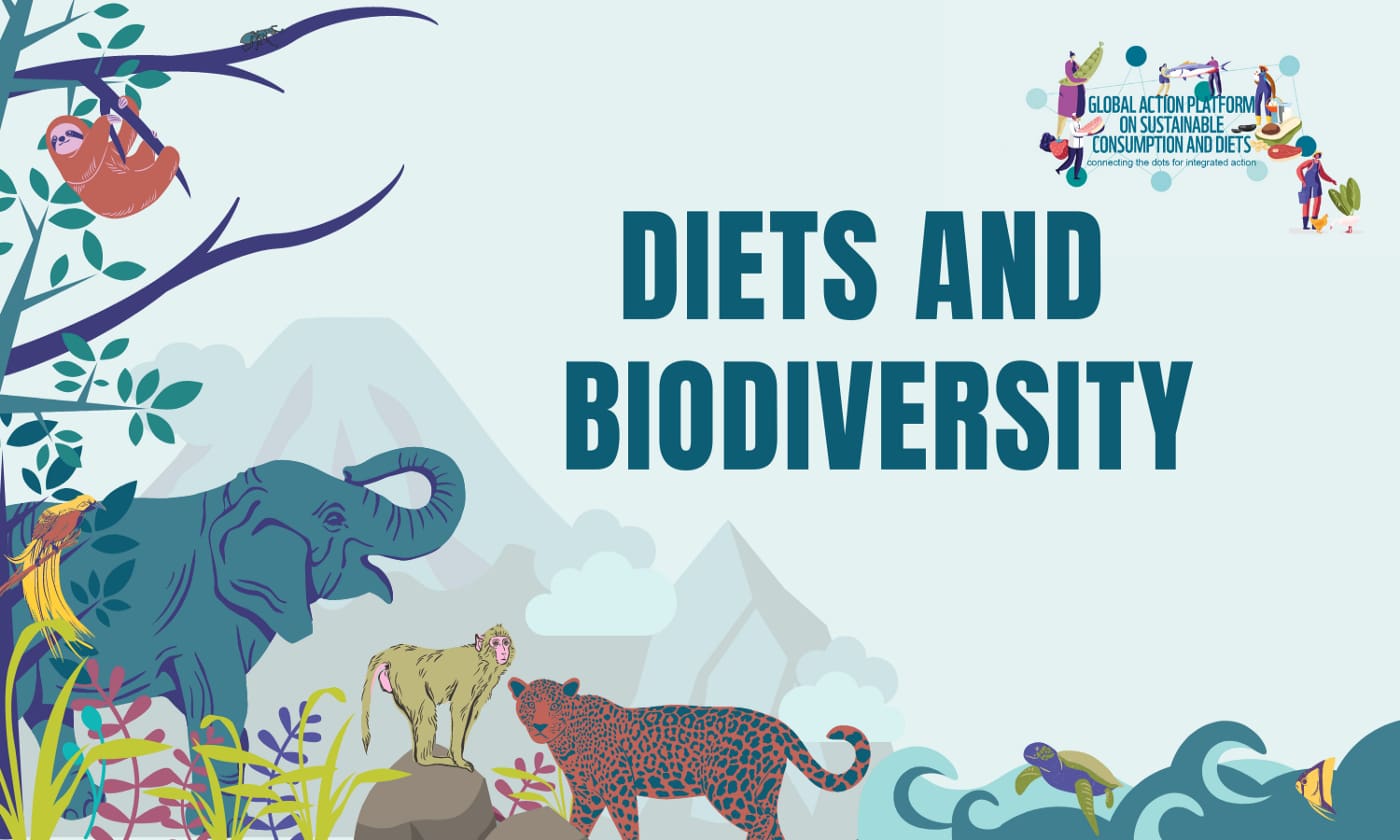 This article first appeared on FoodTank, our official media partner for the Global Action Platform on Sustainable Consumption and Diets.

Biodiversity is crucial to societies worldwide. Plants produce oxygen and store carbon — both important for climate regulation and creating breathable air — but they also release water and volatile compounds into the atmosphere, which in turn influence cloud formation and rainfall. Biodiversity enables carbon to be stored in soil and maintains soil fertility. It provides food we eat directly and supports the production of food in agriculture through pollination, pest control and soil health. Biodiversity also provides important cultural and well-being benefits: many societies recognize iconic plants and animals as culturally important and throughout the COVID-19 lockdown, hearing singing birds has lifted the hearts of people around the world.

Despite the fundamental importance of biodiversity, thousands of species have gone extinct this century indicating that we are in a sixth mass extinction of species that is human caused and accelerating. The primary cause of this biodiversity loss is the production of ever more food. The conversion of land for agriculture, as well as the intensification of agriculture, impacts the quality and quantity of available habitat. Food production also affects fresh-water wildlife* through extraction of water and reduction in water quality from soil and farm chemical runoff. Downstream pollution, especially from fertilizers, even affects marine systems. Marine wildlife is, of course, also heavily impacted through fishing.

The biggest driver of habitat loss on land has been the conversion of natural ecosystems to crop production or pasture. The land occupation of agriculture has increased around 5.5 times since 1600 and is still increasing. Currently, land for food production occupies roughly 40 percent of the world’s land that is not desert and uses 70 percent of the available water resources.

Instead of wild animals, a handful of farmed species now dominate global animal biomass. Farmed animals (mainly cows and pigs) now constitute 60 percent of the global biomass of all mammals, while humans make up 36 percent and wild mammals make up just 4 percent. For birds, the global biomass is 29 percent wild birds and 57 percent chickens. More than three quarters of agricultural land is used to farm these animals or their feed. Overall, agriculture is an identified threat to 24,000 of the 28,000 terrestrial species at risk of extinction. In marine ecosystems, fishing is the largest driver of biodiversity loss.

Conserving biodiversity, reducing carbon emissions, and building climate resilience all have a critical role to play in building more productive and healthy food systems and ensuring food security for everyone. While food is currently one of the biggest threats to and victims of environmental change, the good news is that it’s also our best bet at bending the curves on health and sustainability. The preponderance of evidence suggests that sustainably managed food production systems can actually support and enhance biodiversity and reduce carbon emissions. Incorporating a greater diversity of crops and integration of livestock, creating and maintaining well-connected habitat for associated biodiversity, practicing sustainable soil management and reducing the use of synthetic inputs can increase biodiversity and ecosystem services without negatively affecting agriculture yields.

Developments on the post-2020 global biodiversity framework suggest that we need to promote agrobiodiversity both in our diets, as well as biodiversity more generally, in our production landscapes, thus managing the supply side and the demand side malpractices across the food systems. This means we must transition towards bio-diverse and sustainable diets that provide diverse multi-nutrition diets accessible for all, while also adopting nature-based solutions in agriculture and reducing food waste. Dietary change is a potent tool for reducing the pressure on land, enabling land to sustain both nature and more nature-positive farming. We believe this is possible for two main reasons:

1. At a global level, we produce more food than we need per capita. Approximately, 40 percent of the food produced for human consumption is lost or wasted, equal to more than 2.5 billion tons per year. For many people in more affluent societies, eating fewer total calories, but more diverse, plant-based foods and wasting less can radically reduce environmental footprints and yield significant health benefits. Whilst it is clear “demand” for food is growing, this is often stimulated by markets and increased population wealth, and evidence is rapidly accumulating that, at a societal level, eating less and better can be highly beneficial.

2. The environmental footprint of food — its associated land use, greenhouse gas emissions, water use and biodiversity impact — varies significantly from one type of food to the next. In general, the largest differences occur between animal-sourced and plant-sourced foods, with the latter having lower footprints — in some cases, substantially lower.

If we did not waste food, over-consume calories, or demand excessive amounts of the most environmentally damaging foods, and ate the right amount of the right sorts of food for our health, we would very significantly reduce our total demand for food — and with it, our total demand for land and other natural resources. This is particularly true in more developed countries and urban settings, though in some developing countries consumption of animal-sourced foods may need to increase to tackle burdens of undernutrition.

The Global Biodiversity Outlook– 5 provides valuable lessons for facilitating systemic shifts towards sustainable food systems transition. Sustainable food transition implies that we must promote sustainable and healthy diets with a greater emphasis on a diversity of foods and nutrients, and more moderate consumption of meat and fish, as well as dramatic cuts in the waste involved in food supply and consumption.

There is no “one-size-fits-all” solution to achieve the necessary shifts in our consumption patterns to restore global biodiversity. For example, while shifting to a more plant-based diet might work well for many western countries, it might be difficult at this time for many others. In fact, in some countries, consumption of animal-sourced foods may need to increase to tackle burdens of undernutrition. We must also recognize that food producers are valuable stewards of our land and waters, and many protect vital biodiversity. In all cases, we must work with deep cooperation and empathy to understand diverse perspectives and situations so that we can achieve healthy and sustainable diets for all while restoring the biodiversity that is fundamental to humanity.

*We use the term wildlife to refer to wild — non domesticated — plants and animals (including fungi and microbes) that contribute to the biodiversity in a place.

We recognize the food security and economic benefits of tuna, but we also must recognize the importance of keeping thriving tuna populations in the ocean, where they perform vital services.

Governments have an unchecked opportunity to increase their climate pledges through looking at food systems. They must go further in making the links between dietary guidelines and national climate goals.